Your journey begins in Colón by sailing through the famous Panama Canal that connects the Atlantic and Pacific Oceans. Once past Panama City, we’ll head south to charming cities in Ecuador and Peru, visiting beautiful beaches, archaeological mysteries and UNESCO sites. You’ll then continue to the wildlife-rich Galápagos Islands where you’ll island-hop and explore the archipelago.

You’ll marvel at the engineering brilliance of the Panama Canal as you pass through its complex locks aboard the ship. Exiting on the Pacific coast, we continue south to Manta and nearby town of Montecristi, home of the handwoven Panama hat. From there, we visit the ‘Banana Capital of the World’ in Puerto Bolivar before setting course for Salaverry. If sea conditions enable us to land here, you’ll have the opportunity to explore the area’s ancient architecture on an optional excursion.

Quito and the Galápagos Islands

After flying to Ecuador’s capital Quito and enjoying wandering around its UNESCO-listed historic centre, we continue to Santa Cruz Island in the Galápagos. Over the next two days, you’ll board boats and tour a new island in the archipelago each day, uncovering the supreme biological diversity these islands are known for. Keep your eyes peeled to spot the finches that inspired Darwin’s theory of evolution by natural selection and maybe see native giant land tortoises in their natural habitat. 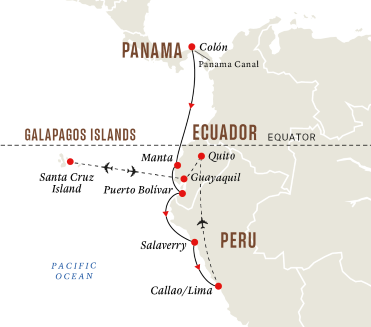