South America’s ancient civilisations go back more than 5,000 years, each rich in culture and innovation. They left behind impressive ruins, art, pottery, and some mysteries.

It is believed that the first human populations of South America arrived via North America by crossing the Bering Land Bridge from Siberia, and then migrated south. The earliest archaeological evidence from human settlement in South America is found in Monte Verde, in Southern Chile. It possibly dates back to as early as 16,500 BCE.

The Norte Chico civilisation emerged in Peru as one of the first independent centres of civilizations in the world. Their first city, Huaricanga, dates to 3,500 BCE. It was the oldest city in America, and one of the earliest cities of the world. It is believed to have been the only South American civilisation also dependent on fishing, and not only agriculture, to support its population.

The Nazca civilisation flourished between ca. 200 BCE to 600 CE in Peru, revolving around their religious centre in Cahauchi, a ceremonial site of pyramid mounds and a plaza dedicated to a pantheon of elemental deities. The people believed these gods of nature would aid them in their life-sustaining agricultural work, sending them the rains to water their fields, but the purpose of the temples at Cahauchi remains unclear to this day.

Skilled farmers, the Nazca created an extensive underground aqueduct system, making it possible for them to produce a variety of crops that included maize, squash, sweet potato, manioc, achira and even cotton and cocoa. However, around 500 CE, the civilisation began its downfall and by 750 CE, it had fallen completely. It is thought that, somewhat ironically, a major flood was partially responsible for their decline.

This civilisation is also responsible for the Nazca Lines, a series of magnificent and large-scale drawings of figures etched into the desert floor in the Pisco Valley. Considered a type of geoglyph, there are multiple theories why these lines were made. One suggests that they were some sort of astronomical alignments that aided the Nazca in the planting and harvesting of crops. There are still no conclusive theories on why these lines were made, so it remains a mystery. 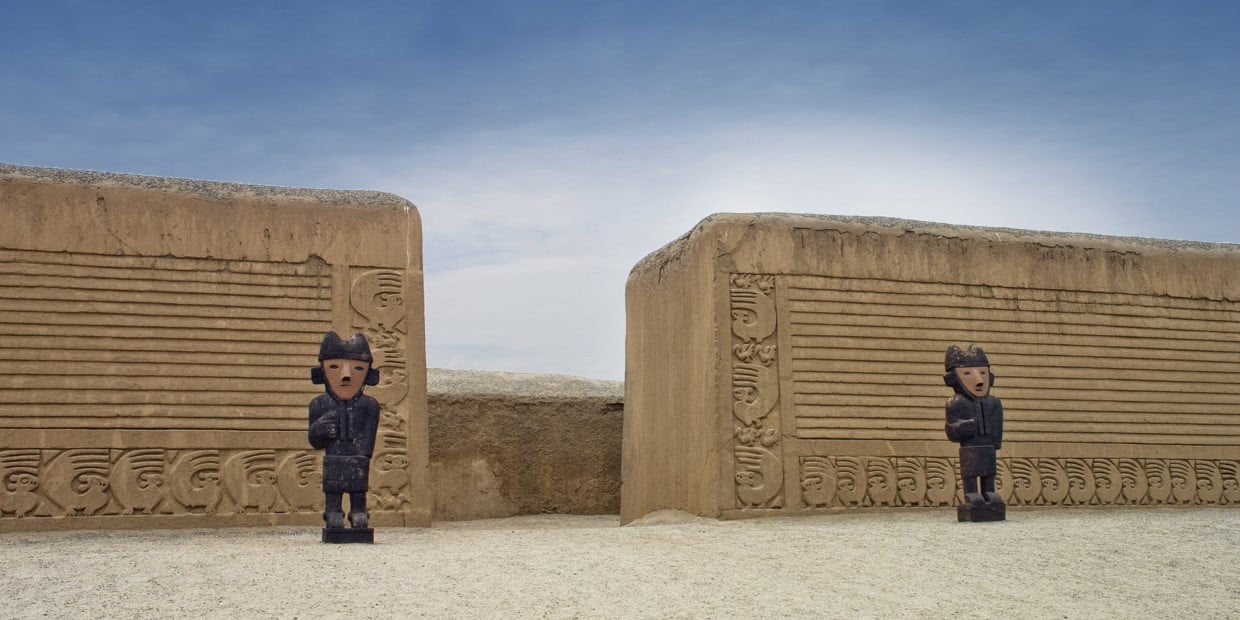 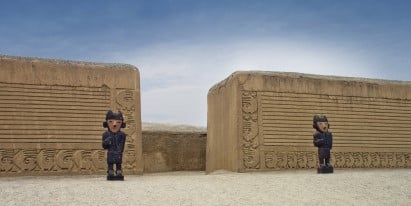 The Chimú State, also known as the Kingdom of Chimor, was founded near modern-day Trujillo in Peru, appearing ca. 1,000 CE. The initial prosperity of the Chimú was largely due to their agricultural feats, supported by an extensive irrigation system.

At its height, the Chimor capital of Chan Chan covered some 20 square kilometres and had a population of up to 40,000. The city was made out of series of pre-prepared blocks of poured mud or adobe. Buildings and streets were interspersed with stone-lined canals and punctuated with small artificial lakes and wells. The most impressive examples of ancient architecture here are the large rectangular palace compounds which served as a royal residence, storage facility, mausoleum, and administrative centre.

The Chimú people are best known for their distinctive monochromatic pottery and metal work of copper, gold, silver bronze and tumbaga, a mix of gold and copper. They used oyster shells as decorations, offerings, and a form of currency. The Chimú state’s downfall came when the Incas conquered Chan Chan in ca. 1470 CE.

The architects and engineers

Emerging in 1438 CE, the Inca Empire was by far the largest Pre-Columbian empire in the Americas. It stretched from what is now Ecuador, through Peru and Bolivia, down into Chile and parts of Argentina. The administrative, political and military centre of the empire was in the city of Cusco. The Inca constructed inns, signal towers, roads, and massive royal states such as the famous Machu Picchu.

The Inca consisted of 6-14 million inhabitants from more than 100 different ethnic groups. Well-devised agricultural and roadway systems, along with a centralised religion and language, helped maintain a cohesive state. There was no written language, but a form of Quechua became the primary dialect, and knotted cords known as quipu were used to keep track of historical and accounting records. Most subjects were self-sufficient farmers who tended to corn, potatoes, squash, llamas, alpacas and dogs, and paid taxes through public labour.

The Inca also had a huge military force. The Inca army was a multi-ethnic armed force used to expand the empire and defend the sovereignty of the territory. As the empire grew in size and population, so did the army, reaching 200,000 men at its peak. Despite their power, the Inca were quickly overwhelmed by the diseases and superior weaponry of Spanish invaders, the last bastion of their immense empire overtaken in 1572.

Want to learn more about these amazing civilizations and visit the UNESCO listed remains, that can still be seen today? On our expedition cruises to South America, you have a chance to see Nazca lines and visit Chan Chan and Machu Picchu.