Boarding your ship in Tromsø already puts you in the Arctic, with the possibility of the Northern Lights appearing from October to March or the Midnight Sun present from June to August. Visit Europe’s northernmost point at North Cape or learn more about the indigenous Sámi culture through a selection of optional excursions.

Gateway to the Arctic 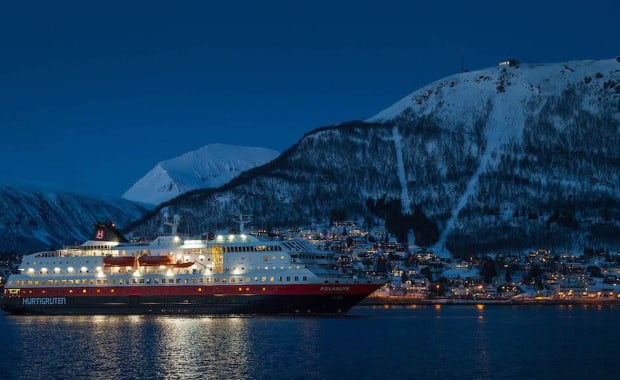 Arriving in Tromsø at night.

Welcome to the historic Arctic capital of Tromsø. If you’ve arrived in the morning or afternoon, you’ll have time to explore the city before your ship departs in the early evening.

You’ll find Polaria, the world’s northernmost aquarium, on the waterfront. Take your pick from the many shops and restaurants in the city centre, including Mack Brewery and favourite local watering hole Ølhallen pub. There are also trendy cafés plying delicious cinnamon buns and where baristas create innovative coffee art.

Across the fjord from where the ship docks, you should be able to see the iconic Arctic Cathedral with its beautiful stained-glass mosaic. You can also take Fjellheisen Tromsø , a cable car ride up 450m above sea level to a viewpoint on Mount Storsteinen for breathtaking scenery.

Leaving Tromsø, we head north for the trading post of Skjervøy, founded in 1622. On our way, we’ll pass the Lyngen Alps which rise majestically from the sea.

Arriving in Tromsø at night. 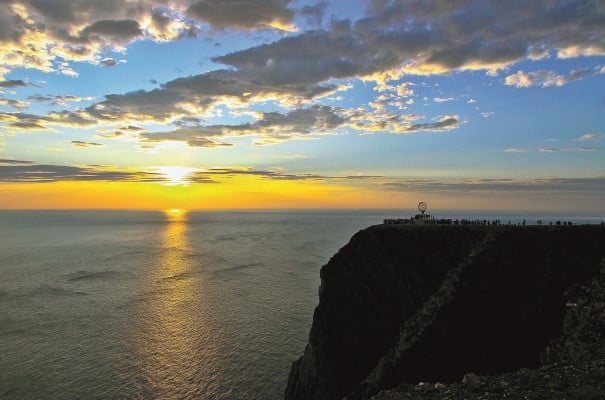 The vista towards the North Pole from North Cape
Photo: Filip Hoel 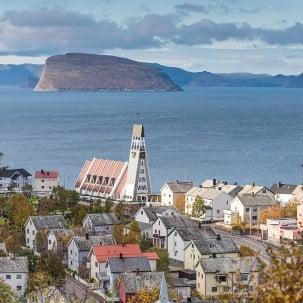 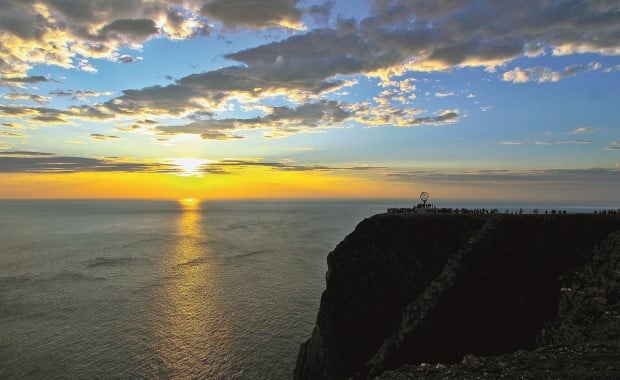 The vista towards the North Pole from North Cape
Photo: Filip Hoel

The ship reaches the town of Hammerfest on the island of Kvaløya early in the morning. In summer, the island has herds of reindeer migrating here in their thousands.

At the top of Europe

We arrive at Honningsvåg mid-morning, portal to the North Cape where a globe monument marks the top of continental Europe. The optional excursion up to the dramatic promontory is very popular, so you’ll want to book early.

Near the entrance of Kjøllefjord village, look out for the striking, building-like rock formation Finnkirka, an ancient sacrificial site once used by the indigenous Sámi. You can join an optional excursion to meet local Sámi, learn about their life reindeer herding, and listen to joik folk songs.

We reach our northernmost port of call, Mehamn, in the evening. If visiting in the months of February and March, you might spot tons of cod drying on outdoor wooden racks called hjell, mainly destined for export.

The ship then sets off for Berlevåg. On the way, we pass the tall Slettnes Lighthouse, the northernmost mainland lighthouse on Earth.

We call at Båtsfjord and Vardø in the night, before docking at Vadsø early in the morning.

Looking to the skies

The area around Vadsø is one of the most scenic and popular birdwatching spots in the Arctic, lying directly under the migration path of birds flying from east to west. Watch for hooded crows and sea eagles.

Kirkenes is just a few miles from the Russian border and has many influences from Norway’s neighbour; from road signs in both Norwegian and Russian, a monthly Russian market, or the WWII Russian Monument.

This is where your Norwegian coastal cruise ends and you’ll have travelled further east than St. Petersburg and Istanbul.

As we arrive in Kirkenes around 9am, you might have some time to explore this fascinating town by yourself, ahead of your onward journey. Go to the border crossing at Storskog, call in at the Varanger Museum, or why not book our Post-Programme at the Kirkenes Snow Hotel, staying either in a cosy Snow Suite or a wooden Gamme Cabin. 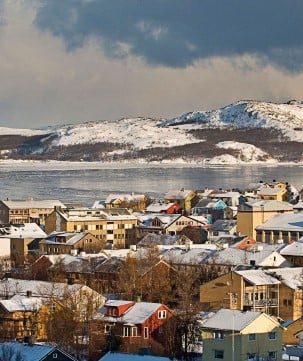 Explore the small Norwegian city of Kirkenes - further east than Istanbul.
Photo: Toma Babovic
The day-by-day programme will give you a few ideas about what you can see and do on your coastal voyage in Norway, but bear in mind that this itinerary is just an indication of what you can experience. After all, this is a sailing where the elements rule and weather conditions might vary, which is why every voyage with Hurtigruten is unique.
Check prices and availability
Check prices and availability