For Captain Maryann Bendiksen, being on a ship offers a freedom she wouldn’t trade in for anything. This is her story of how she became a captain on The Coastal Express.

Maryann has the good fortune of growing up in Reine, one of the most photogenic fishing villages in the Lofoten Islands. Admiring Norway’s beautiful seascapes throughout her childhood, it’s little wonder why the 41-year-old has a real love and respect for the sea.

Maryann’s career to Captain began as a young person aboard our ships. The Coastal Express is one of the largest apprenticeship providers in Norway, and it’s quite common for young people growing up on the coast to have their first formal job with us as a crew member.

For the wide-eyed Maryann eager to explore new horizons, the lifestyle on the ships seemed exciting. “After high school, I took a job in the catering team on the Norwegian Coastal Express ships. There, I met some sailors and I realised that I wanted to have a job that allowed me to travel as well.” 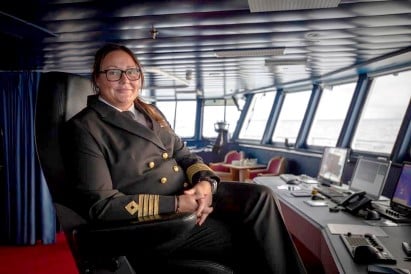 "As a sailor, you work on a ship for up to a few months in one stretch. Each voyage offered a new adventure; you got to truly see the world and be free. It was the perfect job for me,” she says with a soft smile.

After graduating, she joined a tanker as a sailor in training and ended up working on that ship for the next eight years. “I really enjoyed my time there. We usually sailed for a couple of months at a time and all over the world. I especially loved it during the winter months when it was dark and cold in Norway, and there I was sailing in sunny, tropical waters,” she says, letting out a little laugh.

Back in home waters

Maryann soon felt the pull of her friends and family in Norway. “After some years out at sea I started missing people back home. I also longed for the distinct seasons we have in Norway, each beautiful in their own way.”

In order to be closer to home, Maryann took a job as first mate on one of the Norwegian Coastal Express ships in 2011 and started working her way up the ranks, making captain in 2018. Across our company, 45% of our senior staff are women and we’re taking pro-active steps to ensure this trend continues and grows. Examples like Maryann are an inspiration for many, not least young women with a love of the sea and career plans to also become captain of a ship one day.

Maryann sails the Norwegian coast, skillfully navigating the weather and waves in different seasons. “The coast is beautiful but also never the same. You have to get to know it to understand it,” she says. “I learn new things each time about the coast. It challenges me in the best possible way,” states Maryann. “Since the landscape changes along the route, looking different with each season, every sailing feels unique and special.”

Maryann also enjoys knowing that each voyage represents a wonderful new experience for many of her passengers. As someone who knows the Norwegian coast like an old friend, the Captain has a tip for travellers coming aboard: “I always recommend guests bring their own binoculars. There is so much to see from deck; some of it you won’t be able to see clearly without binoculars, like local sculptures, wildlife, and charming, cosy cabins.”

Captain Maryann looks forward to seeing what the coast will show her next. She concludes, “Being a Captain is sometimes hard and you have to make some sacrifices, but it’s definitely worth it. I can’t think of a more interesting and rewarding job.”