Amazed by the Aurora

For KrisTina Kramer from Switzerland, few things in life give her as much of a thrill as sailing with us along the Norwegian coast, chasing the Northern Lights.

Nurse KrisTina Kramer has several hobbies, including hiking, jogging, scuba diving, and photography. But perhaps her biggest and brightest passion is exploring the Norwegian coast with the original Hurtigruten Coastal Express.

“In April 2017, I decided to discover Norway by ship. It was the best decision I ever made,” KrisTina says emphatically.  “The moment I first set foot on the ship is a really special memory for me as I had never travelled by ship before.”

It proved to be love at first sight and KrisTina’s never looked away since, travelling with us for a total of 11 times so far. All her trips have given her a myriad of special memories to recollect. But the Northern Lights still stand out among them as the most vivid.

“I remember the exact day when I saw the Northern Lights for the first time,” reminisces KrisTina. “I was on the ship’s deck, close to midnight on New Year's Eve at sea not far from the town of Mehamn, in Northern Norway. You couldn’t have picked a more perfect time for the aurora to appear!”

KrisTina’s voice is a mixture of excitement and emotion. “The setting was pure magic. Over Mehamn in the distance, there were fireworks going off… and high in the sky above them, filling the view were the Northern Lights, almost dancing in response to the celebrations.”

“Can you imagine that?” She says with a smile of disbelief at her own memory. “I remember being speechless, my mouth half open… It was so amazing I didn’t know where to look! I was just trying to take it all in…” KrisTina trails off, as if once again awe-struck just from recalling the spectacle.

After that defining and dazzling experience, KrisTina was mesmerised. She’s now a self-confessed aurora addict. “Since then, I’ve managed to witness the Northern Lights several times – always on board The Coastal Express,” KrisTina says proudly. It’s no surprise as our route along the Norwegian coast takes us directly under the Auroral Oval, an area of increased auroral activity.

KrisTina continues, “The more sun-storm activity there is, the more likely the Northern Lights will appear within the Auroral Oval. When they do, they dance around you, sometimes wildly, other times slowly, changing colours from green to yellow, and sometimes even into red.”

KrisTina looks up as if searching for an appropriate expression, but gives up stating, “For me, there are no words that can describe the feeling of wonder I have when the aurora lights up the sky. Such a magnificent word doesn’t exist.”

Gazing up the phenomena of light is a bonding moment with other guests on board. “You can feel the excitement out on deck. Strangers greet you happily and start a conversation. I’ve made friends this way and we still write or talk on the phone. When the lights appear, some go quiet while others just scream out loud from pure joy,” notes KrisTina, bemused.

“When the announcement goes out to cabins that there’s a Northern Lights occurrence, we all rush out on deck together. Sometimes, people are so excited and in such a hurry, that they forget their cabin key and lock themselves out. I’ve done it several times myself!” she says, laughing. 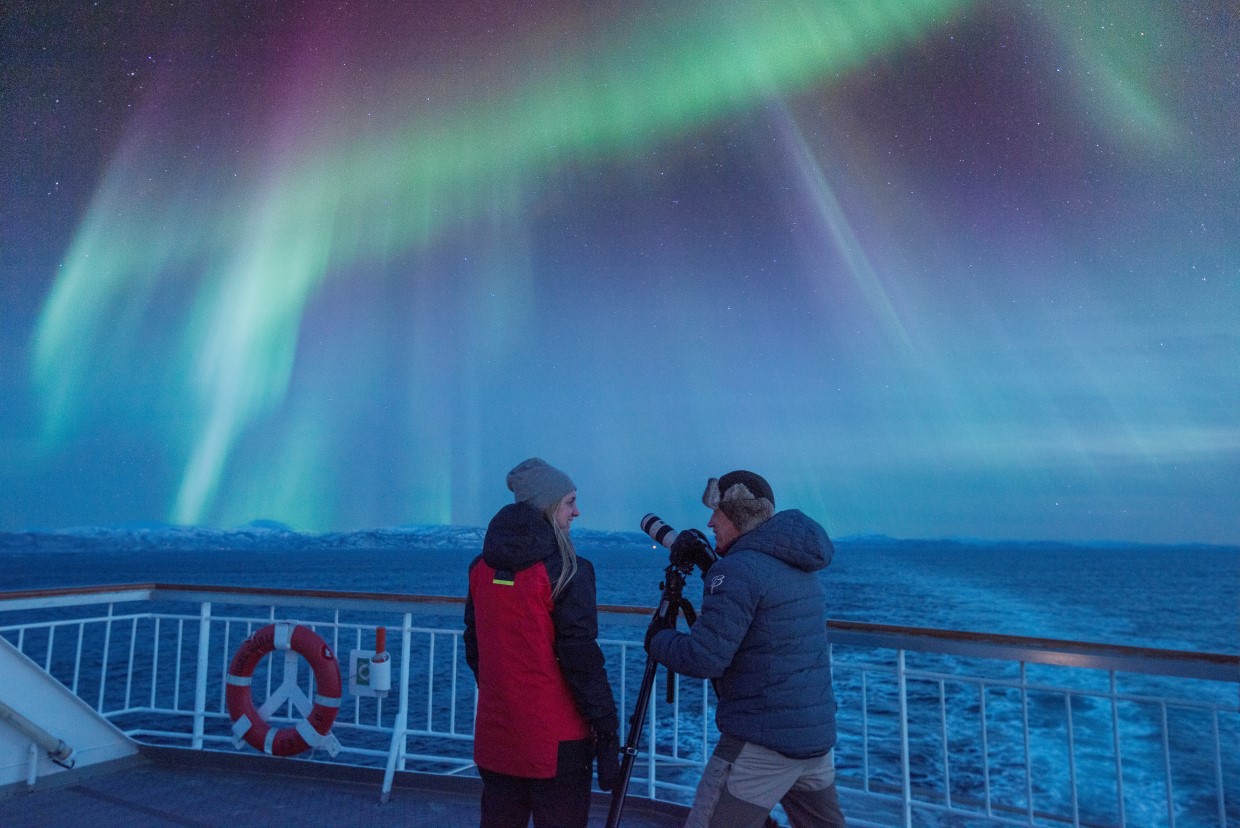 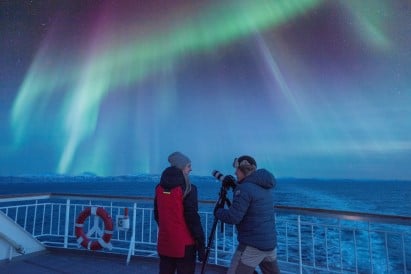