The wildlife along the Norwegian coast is as varied as the coast itself. There is life in the deepest depths and far above the tallest mountains. Some species are only found in certain areas, while others migrate and follow us all the way along the coast.

Patience is a virtue - How to spot the Norwegian wildlife

Wildlife along the Norwegian coast may not be as exotic as the wildlife found elsewhere in the world, but they are still wonderful in their own right. Some species are known to be difficult to catch a glimpse of. Unlike the penguins in Antarctica who actually come over to meet their visitors, wildlife in Norway seem to prefer isolation.

They naturally fear humans, which one has to keep in mind when scouting for wildlife in Norway. Even when we are where the animals actually live, they cannot be lured out. But spending a lot of time on deck with your eyes open and your head tilted in the right direction, is the key to success. Because even if we can’t see the animals, they might be just below the surface or behind the next cape.

Here are some of the species we might discover and on a journey along the Norwegian coast.

King Crab - The king of the ocean floor

The king crab is not something one would stumble upon by chance on a journey with Hurtigruten, unless you find it on the dinner table. But if you want to, you can join local fishermen on a king crab safari, pulling them straight up from cages on the ocean floor. They truly are fascinating creatures, weighing up to 10 kilos and being more than 2 metres across.

The king crab is also known as the Russian crab, since it was the Russians who introduced the crabs into the Barents Sea in the 60s. The king crab originated in the northern Pacific, but the Russians hoped the crab would increase the economy for the people in Murmansk and placed a whole lot of them there. The king crabs, however, are eager wanderers, and it didn’t take long before they migrated east and south along the coast to Finnmark county. At the time, this created quite a stir in Norway as they feared this alien species would disrupt the ocean’s ecosystem. Luckily, it all went well.

Today the king crab is considered a delicacy and has become a part of our fishing culture. Even though most people love them for their taste, it’s something else entirely being face to face with one, pulling them up out of the sea.

Fish in the sea, and the Norwegian silver

There is no other living creature along the coast that has meant more to Norway as a country than fish. Herring, being called Norwegian silver, and other fish have been one of our biggest sources of food and goods to export ever since man first settled along the coast. And the reason humans settled the coast in the first place was because of the fish.

One of the few ways you will be able to see fish in their natural environment, is probably by visiting the Atlanterhavsparken aquarium in Ålesund. But I can promise that the fish, in one way or another, will be a part of everyday life for our guests.

As a part of our Norway’s Coastal Kitchen – serving food made from ingredients from local distributors along the coast – fish is often on the menu in our restaurants. In addition, fishing boats are a well-known and beloved sight, both from deck and when we go ashore. Not to mention the sight and smell of fish in the many fish markets along the coast.

Whales - The giants below the surface

One of the big animals – and by big, I mean BIG – our guests love to see, are whales. Whale hunting used to be a common thing in Norway, and some species were close to becoming extinct. Luckily, whaling was regulated after some time, and most species of whale have since increased in numbers.

The most common species of whale along the Norwegian coast are humpbacks, minke and fin whale, most commonly found in the north of Norway. If you like, you can join whale safaris via boat or even kayaks.

You can’t help but feeling very small when a whale surfaces right next to you. That’s an experience you will never forget.

It’s not just the size of the whale that’s fascinating. Whales can live to be 250 years, and they only spend a fraction of that time at the surface of the ocean – the only place where they can actually breathe. If you are really lucky, being at the right place at the right time, you might see a group of humpbacks surfacing at the same time. Humpbacks can be quite the exhibitionists and are likely to put on a show. It’s impossible not to be thrilled by that sight.

But not all wildlife along the coast lives in the water. Reindeer and reindeer herding have been an important source of trade and a way of life for a long time. Herds are reared for food, pelts, tools and for pulling sleds and wagons.

Reindeer are a species of deer but are unique for being particularly sturdy. This comes in handy in the cold and windy Norwegian steppes and mountains. Fossils and archaeological findings show that the reindeer found its way into Norway more than 12,000 years ago. There are estimated to be around 25,000 wild reindeer and more than 200,000 domesticated reindeer in Norway today.

For the most part, it’s the Sámi people who herd reindeer in Norway. Traditionally, this used to be a nomadic operation, often moving the reindeer several hundred kilometres between summer pasture and winter pasture. As time passed, this nomadic way of living was largely replaced with just a summer residence and a winter residence.

If you are a bird enthusiast, a journey along the coast can be an exhilarating experience. There are, of course, more species to spot during breeding season in the spring, in the summer and in early autumn. During the winter months, migrant birds are long gone to warmer parts of the world.

Unsurprisingly, for the most part, the birds along the coast are seabirds. The most common species are auks, frigate birds, gulls, pelicans, cormorants, darters, fulmars, gannets and sheathbills. If you are lucky, you might even see sea eagles – some with an impressive wingspan of 2.5 metres.

The spice of the coast

The wildlife along the Norwegian coast is, like I mentioned, not the most exotic in the world. And it can be really hard to find some of the animals that live here. But since it is so hard to catch a glimpse of them, it’s always very rewarding when you actually get to see an eagle or a whale or a group of reindeer grazing. For the most part, it’s all about seeing the animals in nature, in their own realm where they belong.

The Norwegian coast is fantastic with its mountains and fjords, and the animals are there to bring it all to life. In a way, they are the spice of the coast, bringing more flavour to it all. Nature in itself is great, but if in addition you get to see a whale, or if you get close to a sea eagle, that will really make your day. 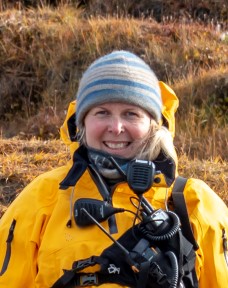 Karin grew up among the Norwegian fjords and is one of our most experienced Expedition Leaders. She joined MS Nordnorge’s first adventures to Chile and Antarctica in 2002 and has guided on many routes and on most of our ships.

She admits to having permanent polar fever. Karin is a keen kayaker, spending much of her spare time paddling in oceans and rivers around the world.

“For the entire Hurtigruten family, there´s a strong sense that we can change things for the good of our planet – so we take important steps like using cleaner fuel and eliminating single-use plastic on our ships.”