An endless white wilderness, Antarctica is nature at its most sublime and haunting. Read more about some of the possible landing sites you could explore on a sailing to Antarctica with Hurtigruten.

During our astonishing Antarctica voyages you will learn of the great explorers who paved the way into these southern oceans, gazing out across landscapes that have remained as awe-inspiring and unchanged as the day that man first set eyes upon them.

Four of Hurtigruten's explorer ships take you as close as possible to Antarctic wildlife and untouched wilderness. Each of our vessels offer a fascinating and varied schedule of  landings, all designed to create unforgettable memories. MS Fram will carry only 200 guests, while MS Roald Amundsen and MS Midnatsol (MS Fridtjof Nansen from 2019) will carry 500 each. This relatively small passenger size allows Hurtigruten explorer ships to make landings in some of the most spectacular scenery of the area, following IAATO regulations. MS Fram is a category 1 vessel, offering the widest possible range of landing sites.

How Hurtigruten does landings 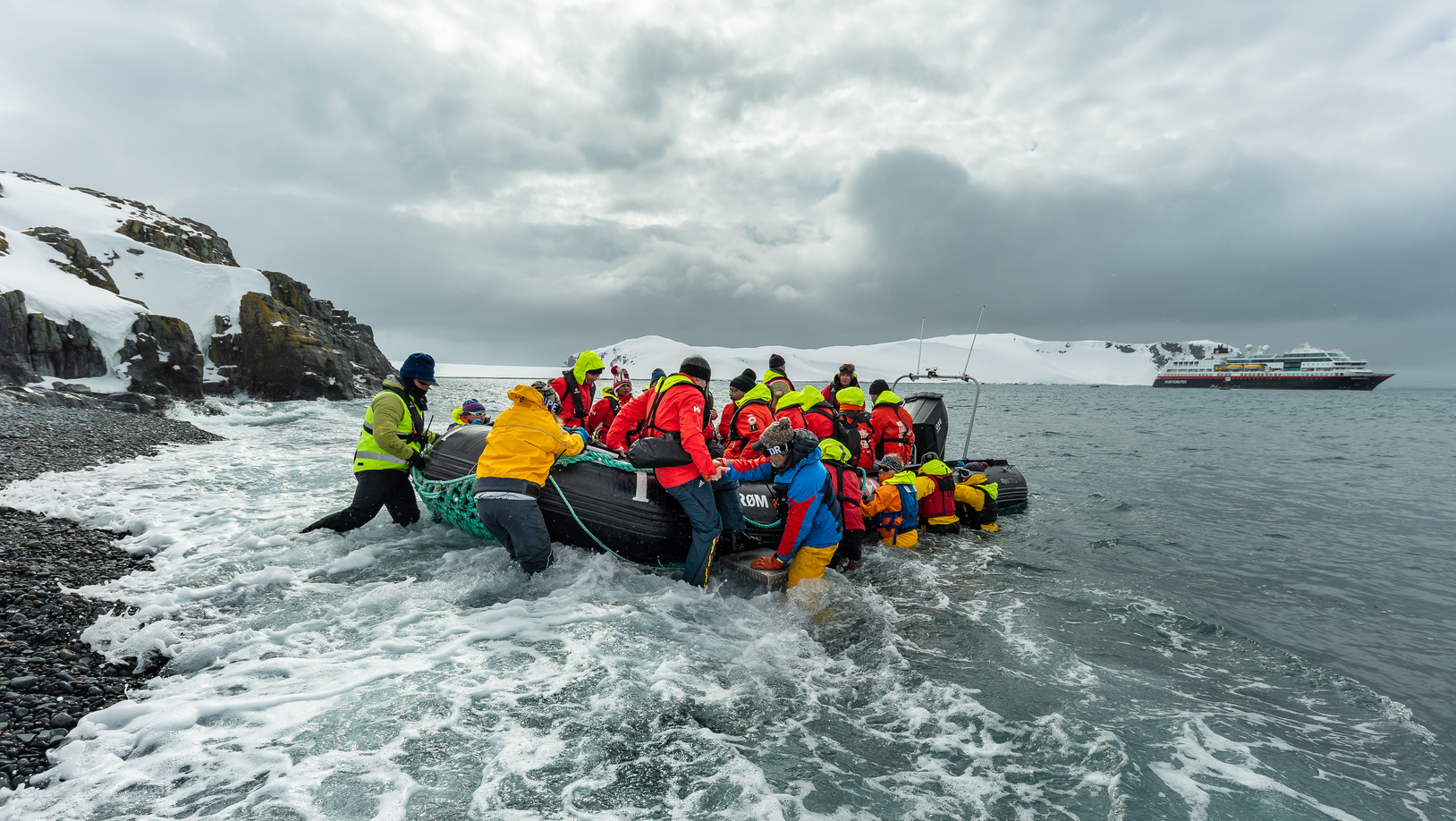 Completing successful landings require experience - in Hurtigruten we have 125 years of it, and take pride in offering seamless landings to all our guests. From our tender pit - a small pier folded out on the side of the ship - you board small rubber boats that take up to 20 people. Then we take you ashore. But before this happens, we make sure to follow a few simple principles to make every landing run smoothly: 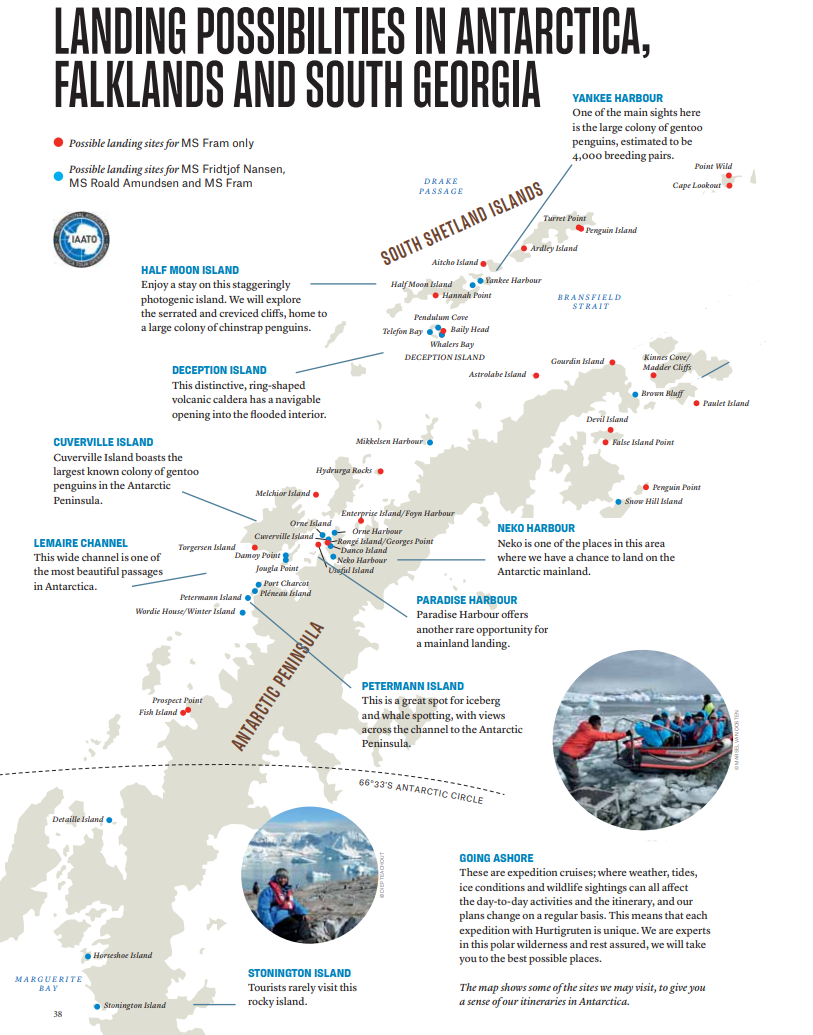 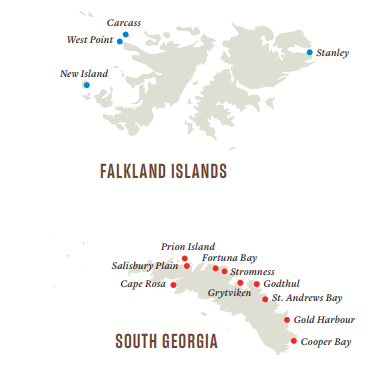 Weather, wind, ice and local conditions will determine the exact nature of your programme and schedule. Safety is paramount and the ship’s captain will decide the final sailing itinerary during the voyage. Therefore every voyage is unique and all advertised routes, by the very nature of the region, can only be indicative.

Below you will find a selection of some of the possible landing sites in Antarctica depending on your voyage’s planned itinerary:

One of the highlights of the South Shetlands, Deception Island is a distinctive ring-shaped volcanic caldera, a portion of which has collapsed and created a navigable opening into the flooded interior. The natural harbour within includes Whalers Bay, home to an abandoned whaling station known as Hektor, as well as a derelict British base.

Staggeringly photogenic and blessed with some of the most spectacular Antarctic scenery imaginable, Half Moon Island is a glittering gem amongst these island treasures. Its serrated and creviced cliffs are home to a large colony of chinstrap penguins, as well as Antarctic terns, kelp gulls, snowy sheathbills, Wilson’s storm petrels and several species of seals who are regular visitors to the island.

Early sealers in the area used Yankee Harbour on Greenwich Island as a frequent base of operations, its remarkable setting providing a natural safe haven for the sailors. Remnants of those early days can still be seen littering the shoreline, but the big draw for visitors here is the large colony of Gentoo penguins, whose numbers are estimated to be around 4,000 breeding pairs.

Situated in the scenic Errera Channel, Cuverville Island boasts the largest known colony of Gentoo penguins. The narrow Errera Channel offers a spectacular passage to and from Cuverville as icebergs become trapped and grounded in the nearby shallows. Watching from the observation decks as our navigators weave the ship carefully between the icebergs is as exciting as being surrounded by the throngs of nesting penguins onshore.

Neko Harbour with its Gentoo penguin colony lies nestled in Andvord Bay, surrounded by the mountains and high glacier walls of the peninsula. Named after a factory whaling ship from the early 1900s, Neko is one of the rare places in this area where you may land on the Antarctic mainland.

The harbour is paradise not only in name, but in splendour and scenery as well. Protected from the winds of the nearby Gerlache Strait, Paradise Harbour offers another rare opportunity for a mainland landing and some of the finest vistas the Peninsula has to offer. Here you can find the Argentine base Almirante Brown and the Chilean base Gonzalez Videla, as well as colonies of neighbouring penguins.

See more videos from our possible landing sites on our Youtube channel.

This 11 kilometre long and 1.6 kilometre wide channel is one of the most beautiful passages in Antarctica. It bestows upon the traveller a glimpse into what fascinates us most about this incredibly contrasting environment; it is sublime yet imposing, delicate yet daunting, alluring yet inhospitable.

Its location in the picturesque Penola Strait makes Petermann Island a great spot for iceberg- and whale-spotting and offers spectacular views across the channel to the Antarctic Peninsula.

The British base of Port Lockroy on Goudier Island was built in 1941 and abandoned in 1962. It lay empty until 1996 when it was refurbished as a museum by the Antarctic Heritage Trust. It has since become one of the most popular sites in Antarctica and offers a unique peek into life in an Antarctic base in the 1950's.

The mountains and high glaciers around Wilhelmina Bay ensure plenty of dramatic scenery and sculpted ice from tiny floating pieces to large bergs. The bay is a choice feeding ground for whales and seals and therefore was a rich hunting ground for the whalers of the past.

The huge ice shelves of the Antarctic continent give birth to mile-long tabular icebergs. The strong currents of the Weddell Sea conspire to bring these massive flat-topped bergs north into the Antarctic Sound at the north-eastern end of the Antarctic Peninsula.

Brown Bluff lies on the coast of the Antarctic Sound at the tip of the Antarctic Peninsula. As the name suggests, the landscape is dominated by an ominous 745 metre high cliff. The towering, rust-coloured bluff is volcanic in origin and the beach is peppered with lava “bombs”. Adélie penguins, Gentoo penguins, kelp gulls, and cape petrels can be found breeding here and Weddell seals are also regular visitors.