The History of Hurtigruten - Sailing in the Wake of Giants

In the late 19th century, the 780-mile coastline from Bergen to Kirkenes was a busy route for transportation of goods and people, operated by all types of vessels from steamers to the single-sailed 'jakts'. But services were unreliable, infrequent and ships rarely sailed at night, making a journey between north a south a long and arduous one.

The authorities wanted to improve  the situation and invited shipping companies to submit tenders for  operating  an express route between Trondheim and Tromsø, or Hammerfest, depending on the season. At that time there were only 28 lighthouses north of Trondheim, making nighttime sailing very risky. But the owner of a newly formed company showed an interest in the route despite the hazards.

This man was Richard With, from Stokmarknes, in northern Norway. In 1893, Captain Richard With’s steamer, DS Vesteraalen,  was brought into service along the coast of Norway, and a regular sea link was established. The service offered weekly  departures, at first from Trondheim to Hammerfest and later from Bergen to Kirkenes, the latter  in only seven days. With named this important connection “hurtigruten,” - "the fast route".

Richard With's eagerness to explore did not stop at  the Norwegian coast. His ambitions were significantly higher. As early as 1896, he transported a prefabricated hotel from the mainland to Svalbard. He placed it outside Longyearbyen on what is still called “Hotellneset” ("Hotel Point"). The same year, Richard With established the "Sportsman's route" from Hammerfest on mainland Norway to Svalbard, serviced by the steamer DS Lofoten. Its captain was Otto Sverdrup, who later became Fridtjof Nansen's legendary commander of the polar vessel Fram.

This marks the beginning of Hurtigruten's adventurous and unique explorer operations. Our destinations are no longer limited to Spitsbergen, but include Iceland, Greenland and Antarctica. Hurtigruten’s eleven coastal ships still carry freight and guests along the coast of Norway to 34 daily ports of call. Our captains have extensive maritime expertise and experience and bring guests and goods safely from port to port. Every day one of our ships departs Bergen heading north to Kirkenes.

The full round trip lasts 12 days and is of many called “the world’s most beautiful voyage”. Today, as they have been more than 120 years, our ships are the best way to explore the Norwegian coast, its nature and culture.

In 2018, Hurtigruten turned 125 years. We celebrate the occasion with this video, The Story of Hurtigruten.

Hurtigruten’s founder, Richard With opened a hotel on Spitsbergen, and the Hurtigruten “Sportsman’s Route” was put into operation between Hammerfest and Svalbard with DS Lofoten.

The route along the Norwegian coast was extended to the south and included Bergen with one weekly departure.

Kirkenes, near the Russian border, became the northern turning point of the coastal voyage.

DS Dronning Maud was the first ship with cabins that had running water and a separate ventilation system.

A ship left Bergen every day. Each year, more than 230,000 passengers travelled onboard the fleet, which comprised 14 ships.

All Hurtigruten ships were equipped with a radio transmitter.

Since 1949, seven new ships had been added to the fleet. The entire fleet transported 500,000 passengers a year. The distinction between classes was done away with.

MS Lofoten was put into service. After 55 years of sailing the Norwegian coast every day and every season, MS Lofoten stopped her daily service between Bergen and Kirkenes in December 2020.

Hurtigruten started an express route to Spitsbergen in the summer months.

The new vessels MS Vesterålen, MS Midnatsol and MS Narvik replaced older ships. The Midnatsol was the first of our ships to have a side hatch for easier loading and unloading.

MS Lofoten was given protected status by the Norwegian Directorate of Cultural Heritage.

MS Nordnorge sailed to the Antarctic Peninsula for the first time. Two new ships, MS Trollfjord and MS Finnmarken, made their maiden voyages along the Norwegian coast.

The new MS Midnatsol was christened in Hamburg.

The new Hurtigruten expedition ship, MS Fram, was ceremoniously christened by Her Royal Highness Crown Princess Mette-Marit in Oslo before her maiden Hurtigruten voyage to Greenland.

As well as exploring Greenland and the waters of the Antarctic, MS Fram started operating along the coast of Spitsbergen.

The northbound journey of MS Nordnorge from Bergen to Kirkenes from 15 to 22 June was broadcasted live on Norwegian television. At 134 hours, 42 minutes and 45 seconds in length, it made it into the Guinness Book of World Records as the world’s longest live broadcast.

Hurtigruten expands the fleet with an explorer vessel. The fleet now counts 13 vessels.

Hurtigruten doubles its capacity in Antarctica. Now both MS Fram and MS Midnatsol spend the winter in Antarctic waters.

Hurtigruten celebrates its 125-years anniversary by announcing the ban of unnecessary single-use plastic on all ships, restaurants and hotels. What started as a local transportation company in 1893, now operates a fleet of custom built expedition cruise ships, exploring over 200 destinations in 30 countries worldwide. 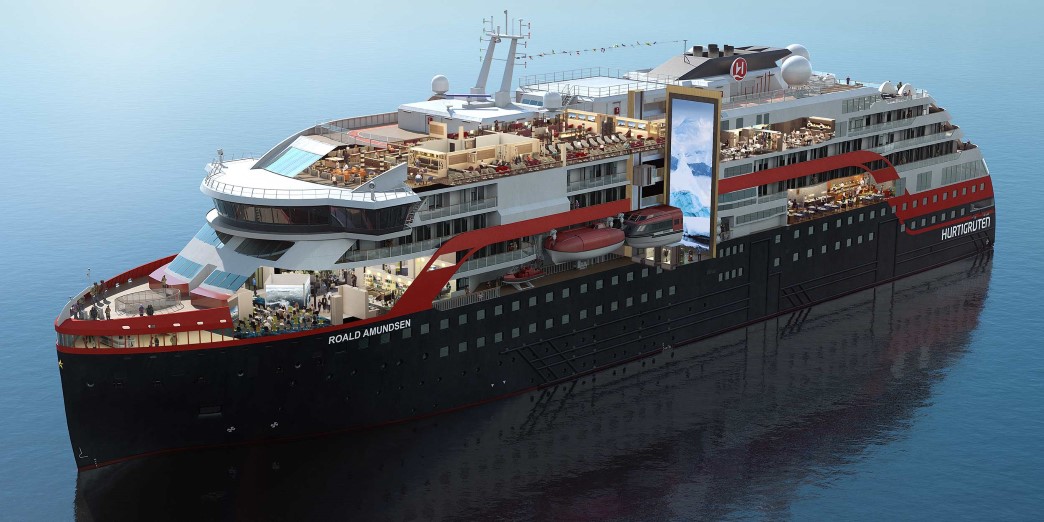 Discover all the onboard facilities in our interactive version of MS Roald Amundsen and MS Fridtjof Nansen.