Bringing Science from the Arctic to a wider Audience

Fascinating research conducted in the Arctic reveals hidden truths about our whole planet, yet few people ever hear them – inspiring Maria Philippa Rossi to bridge the gap with a ground-breaking book.

With its pristine nature and unique environment, the Arctic attracts intense study. Scientists working here strive to unlock the secrets of the tundra and chart the effects of climate change. Yet, despite their stellar work and the importance of their findings to everyone on the planet, few people outside the scientific community ever hear about it.

Maria Philippa Rossi became aware of this discrepancy while working as a Communication Advisor at The University Centre in Svalbard.

“I’m flabbergasted by all the research that’s conducted in the Arctic that people don’t know about,” she says. “There are changes taking place in the Arctic while you read this, but much of the research is communicated in a way that most people don’t have the time or the scientific language to understand. It becomes too professional and alienating for most of us – which makes many people think that it doesn’t affect them. And here comes a spoiler alert: what happens in the Arctic affects you!”

Maria Philippa Rossi is a published author of a book about the world’s greatest hikes and an experienced public speaker. So, when she realised the extent of the gap between polar knowledge and public understanding, she hit on the idea of writing a book as part of a wider effort to spread awareness.

This new book will investigate the extensive climate research that’s conducted in the Arctic, and ‘translate’ it into engaging, inspiring, and thought-provoking language that people can understand more easily. Ultimately, Maria’s aim is to enable a 16-year-old to understand the science and be interested in it.

To achieve this, the book will seek to present the research in a very engaging way – by telling the stories of the people involved. In On Thin Ice, you’ll meet scientists who work with glaciers, sea ice, and snow, and get to know what their research is all about, and their passion behind it.

“Through meetings with unique people, participation in field studies, and putting questions to the researchers, the book will give the reader insights into the state of the ice and snow in the Arctic, and how what happens here affects the rest of the globe,” says Maria Philippa Rossi.

Currently, a lot of research is only communicated through scientific articles and teaching, and the general public thus misses out on this important – and exciting - information. Through her book, Maria therefore hopes to get this kind of research included in the public debate and considered when political decisions are made.

“The book will elevate the scientists and perhaps remove some prejudices. Scientists are doing an amazing job, and the solution to the climate challenges may be in their hands! Hopefully the book can increase the public interest and understanding of the complicated, but very important research in the Arctic” she says.

An ideal partner for Hurtigruten

On Thin Ice is written with support from the Hurtigruten Foundation of NOK 75,000 (approx. €7,800), in order to raise environmental awareness and give ordinary people an educational journey into the Arctic. To this end, it will be supported with speaking engagements where Maria will be able to add even more depth to the stories.

Hurtigruten Expeditions focuses on science communication on board their vessels, making On Thin Ice a natural fit with Hurtigruten Foundation. The book will be able to take the scientific understanding of Hurtigruten’s guests one step further. What’s more, it can give them something they can bring home from their travels – to learn more and share the knowledge with their family and friends.

Where can I learn more? 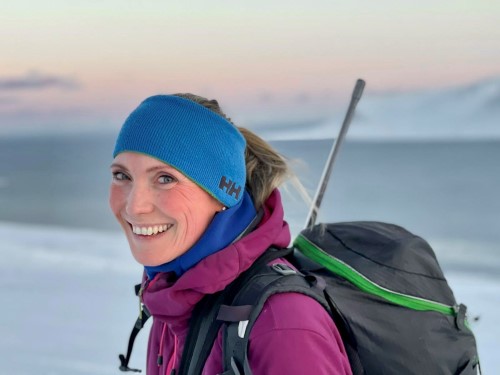